This is probably one of the easiest ways to cook a whole chicken and I will definitely be doing this again.  Probably many times.  The easiest way to get the entire chicken eaten is to have three hungry men, one girl, and one kitty.  I’m always hesitant to make a whole chicken because you never know who likes what part of the chicken.  I’m a fan of the chest, though I don’t mind the wings or thighs either.  It didn’t seem to be a problem last night.

I had a bottled marinade that I got from my dad in one of his goodie boxes.  We get all sorts of fun, sometimes interesting, stuff from him.  Most are things I’d never buy, but since they’re free, I figured I’ll give them a try.  This one was called Pirate’s Gold Inferno Hot Marinade.  I marinated the chicken for about 6 hours before cooking in.  A simple marinade of  a little olive oil, garlic, and spices of your choice would work wonderfully instead.  I’ve read that the beer does little to actually flavor the chicken, rather it just keeps it super moist, so I used a Coors Light.  I’m skeptical and may try a more flavorful beer next time.  Don’t forget to sample about half the beer before putting it on your grill 😉  Nate had a fancy stand that the beer can sit in and support the chicken, but you don’t need to have one.  Just balance the chicken on it’s legs while resting on the beer can. 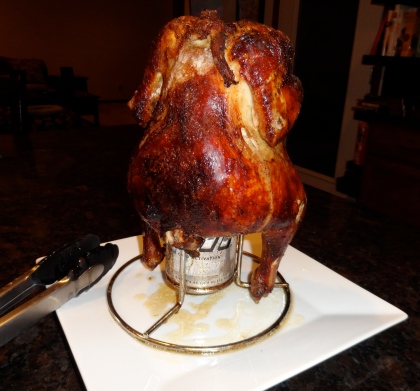 The entire chicken was eaten in probably less than 15 minutes.  I gave Charlotte, my adorable kitty, the first taste.  Big mistake!  She wouldn’t shut up or leave me alone until I gave her more…and more…and more.  Finally she just sat on my lap and tried to help herself.  The boys gave the chicken rave reviews!  It was so moist and juicy; it was unbelievable!  The marinade made its way into the meat, and not just the crispy skin, which gave the chicken a great spicy kick.  This would be an excellent choice for a casual grilling party, especially in the summertime when you are busy playing lawn games and/or enjoying adult bevies.  You can set it and forget it!

1. Remove neck and giblets of chicken and discard.  Rinse with water, inside and out, and pat dry.  If you choose, marinade your chicken 4-24 hours in advance.

2. Holding a chicken leg in each hand, place bird cavity over 1/2 full can of beer.  Salt and pepper bird generously.

3. Place chicken-on-beer-can on the grill and cook over medium high indirect heat for 1 1/2 hours, until internal temperature of breast is 165 degrees and thigh is 180 degrees, or until juices run clear when stabbed with knife.  Let bird rest for 10 minutes before carving.

3 comments on “Beer Can Chicken”