I’ve had this pork tenderloin in my freezer for about two months; I bought two because they were on a great sale, and used the first one for the hoisin glazed pork tenderloin.  I’m not a big pork eater, but when I do eat pork, I prefer tenderloin versus a chop, as the meat is so much more, well, tender.  I decided to throw it in the slow cooker with some seasoning and salsa to make some tacos for Friday night dinner. 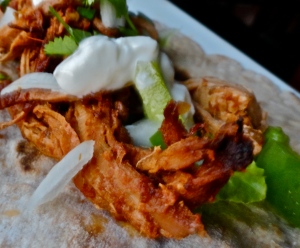 On on a side note regarding “slow cooker” vs. “Crockpot”…some people wonder why I use the term slow cooker as opposed to Crockpot.  Well, if you don’t already know the answer, it’s because Crockpot is a (well-known) brand of slow cookers, where as slow cooker is what the appliances is actually called.  Think about tissues and Kleenex, or lip blam and Chapstick.  I don’t know why, but it drives me crazy when people refer to lip balm in general as Chapstick.  I’m a Blistex girl myself.  I do own a Crockpot, but  I still refer to it as slow cooker.  Okay, rant over.

As per usual when I have something in my slow cooker, when I got home from work, my house smelled amazing.  I don’t know how the cats can stand the insanely awesome aromas all day long; it would drive me crazy.  I shredded the pork and left it on warm as we had to run a few errands before dinner.  All I could think about was pork tacos and I was getting crankier and crankier the longer they took.  Finally, we got home and were ready to eat dinner. As usual on Friday, we didn’t get around to it until after 9 PM, which means my pictures don’t turn out quite as well.  But believe me when I say these were yummy. 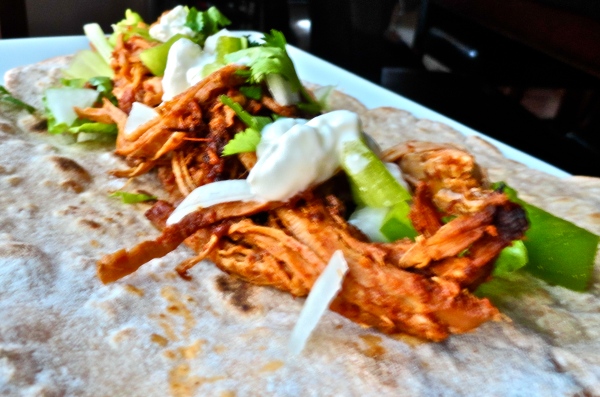 1. In a small bowl, mix seasonings.  Add tenderloin to slow cooker and sprinkle seasoning mix over the top.  Add salsa, and cook on low for 6-8 hours.

2. After 6-8 hours, shred tenderloin with two forks, and mix with remaining liquid in slow cooker.  Serve in soft or crunchy tortilla shells, over rice or over salad with desired toppings.