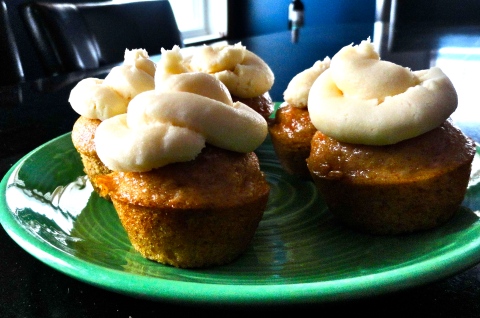 I didn’t have a recipe in mind before I started, so I headed over to Prevention RD, on of my faves, to see if Nicole had any recipes.  What do you know?  She did!  Even better, she had a lightened up version of the cake.  Score!  I’ve had this huge tub of fat-free plain yogurt in my fridge for a few weeks, which I bought on accident.  I was meaning to buy plain yogurt, which I almost never buy non-Greek style, for perfectly flakey buttery pie crust.  I didn’t want to use the fat-free for the pie crust, as it was for an event I was doing, and didn’t want to take any risks.  I decided to cut the butter in the recipe with the yogurt.  There isn’t a lot of butter, but at least it’s a start on making a dent in that vat of yogurt!  When you are substituting yogurt for butter in baking, you need to use half the original amount of butter, and half the amount of yogurt as butter.  So for example, if a recipe calls for 1 cup butter, you would use 1/2 cup butter, and 1/4 cup yogurt.  Nicole’s recipe called for 6 tbsp butter, so I used 3 tbsp butter, and 1 1/2 tbsp yogurt.

The result was great!  The cakes were moist and fluffy, with a rich sinful flavor.  The frosting was really unnecessary, but I used what I had left anyway, because although frosting isn’t “necessary”, it’s still delicious!  Even better, Nate said they were “really good”.  This is why I never believe him when he says he doesn’t like something…what does he know? 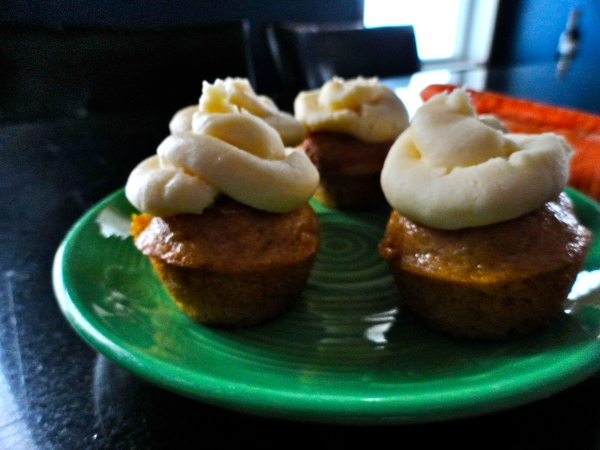 1. Preheat oven to 350 degrees.  In a large bowl, whisk together flour, baking powder, cinnamon and salt. Add grated carrots to flour mixture, and toss to combine.

2. In the bowl of a stand mixer, combine sugars, butter and yogurt.  Beat at medium speed until well combined.  Add eggs one at a time, then vanilla extract.  Add flour and buttermilk while mixing, alternating between the two, starting and ending with flour.   mixture.  Continue to mix until all ingredients are well combined.

3. Prepare a mini cupcake tin with cooking spray (or cupcake wrappers).  Spoon 1 tbsp batter into each cup.  Bake for 10-12 minutes.  Remove from oven and transfer to wire rack to cool.