Two recipe swaps in a row, and I’m almost on fire!  As always, the swap was hosted by Sara at A Taste of Home Cooking.  This week’s theme was chicken, so there was absolutely no way I

wasn’t going to participate.  I submitted my honey mustard chicken skewers with a kick, one of my favorite chicken dinners!  As for me, I was assigned honey garlic chicken drumsticks from Sweet Beginnings, which just so happens to be one of the blogs I frequent.  Jaida has mad love for food, and her recipes have never disappointed.  In fact, I had her blog for a bloggers choice swap not too long ago, in which I made her avocado and lime black bean tacos.  YUM!  Based on previous results, I was really looking forward to making her chicken drumsticks. 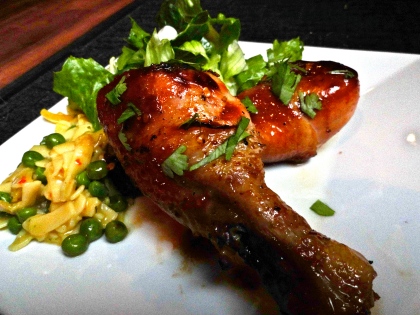 I don’t really care for chicken drumsticks.  I don’t even like wings all that much.  But I still eat them.  And I still buy them when they are on sale.  That’s how thrifty I am.  Some like to call it cheap 😉  I had these drumsticks in the freezer for a few months, so it was actually time to use them (and I’m certainly not pretending that I wouldn’t have used them if they’d been in the freezer longer than that).  The recipe was pretty simple, including all ingredients I had in my kitchen already (one of my favorite things!).

These came together rather quickly – a little too quick, so I used the sauce as a marinade and put the drumsticks back in the fridge until it was closer to the time Nate would be home.  I was a little concerned about the amount of butter used in comparison to the rest of the ingredients, but hey, it’s a swap and I played by the rules 🙂  The result was good.  The sauce got nice and sticky in the oven and the skin browned nicely with a slight crisp.  While the sauce smelled really sweet (Nate actually commented on that when he walked in the house), the butter flavor was a bit overwhelming.  Personally, I would omit this altogether the next time.  I know when Nate really likes something as he usually says so, and he also would eat the leftovers.  We had one drumstick left, and he wasn’t calling it for his lunch, so I knew it wasn’t his favorite, and he told me so.  But that’s okay.  Logic tells me that if he’s honest about not liking one thing, that means he’s likely always honest about liking everything else 😉  This would be a great go-to meal for a weeknight when I haven’t planned dinner!  Thanks, Jaida!

1. Preheat oven to 400 degrees.  In a small saucepan, melt butter over medium-low heat.  Add garlic and cook until fragrant, about 3 minutes.

3. Arrange drumsticks in a single layer in a baking dish.  Sprinkle generously with black pepper, salt if desired (remember the soy sauce will naturally add salt).  Pour the sauce over the drumsticks and roll to coat evenly.

4. Bake for 40-45 minutes, until chicken is cooked through.  I turned the broiler on for the last 5 minutes to crisp up the skin a bit.  Garnish with cilantro and serve.

Click here to see what the other recipe swappers cooked up!