If you know me at all, you know I’m a chocolate girl.  But, if dessert doesn’t have chocolate in it, the next best thing is ice cream!  I saw this recipe in the latest issue of Food and Wine and thought I had to try it right away!  On Saturday we were having dinner at Nate’s parents house with his aunt and uncle who were in town for the weekend.  My initial plan was to make these for dessert for this occasion, but then I decided to first try it out on our neighbors, since we had them over for dinner the night before. 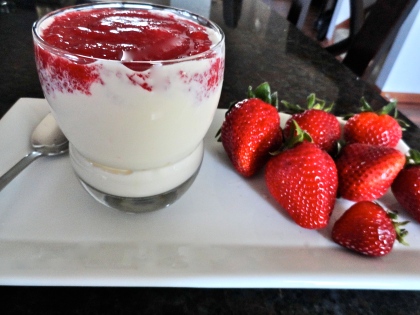 It’s a good thing I tried it first.  I couldn’t tell you the last time I used my blender, but I can tell you its likely been at least 3 years.  I don’t have a lot of use for it since I use my food processor for almost everything.  I used to use it for soup, but then I got an immersion blender (which is fantastic!).  So it’s really just sat in my cupboard, next to all my old unused water bottles and our bubbas.  But finally, it got to see the light of day when I broke it out to make these milk shakes.  I barely had time to pre-make anything for dinner on Friday because I was so busy making grapefruit margaritas and buffalo wing hummus, so I had to whip these up on the spot.  I put all the ice cream in the blender, added the milk, and hit the puree button.  While the blender sure did make a lot of noise, nothing seemed to be happening.  The ice cream wasn’t even moving.  After struggling with it for a few minutes, I finally took the top off, while running, and had to manually press down the ice cream in order to get it blend continually.  I had the same embarrassing experience with the strawberries.

For Saturday, I decided to make the milk shakes beforehand.  I already had my food processor out from the night before, so I threw the strawberries in there for the puree.  After rinsing it out, I decided I’d give the ice cream a try in the food processor.  It worked so much better than the blender, though I had to make about three separate batches.  Oh well.  I’ve come to the conclusion that I need a new blender.  I have my eye on the ninja.  My parents have one and they absolutely love it.  I’ve used it several times at their house and it works like a charm.  Seeing as though I rarely use the blender though, I’m finding it hard to justify the price.  For now, I’ll just pack up the old blender and put it back in the back of the cupboard where it belongs. 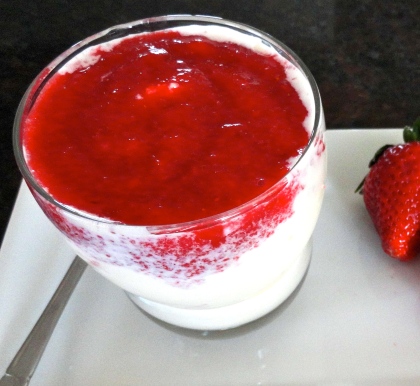 Oh, you wanted to know how the milk shakes taste, not how difficult it was for me to make them?  I suppose that’s the purpose of the blog.  The milk shakes were so yummy.  The ice cream was smooth and silky, the exact consistency of how I like my milk shakes.  Had I had any straws, I would have used them instead of spoons for serving.  The fresh strawberry puree on top really made the shakes pop with flavor and color.  It was a refreshingly sweet treat after dinner! 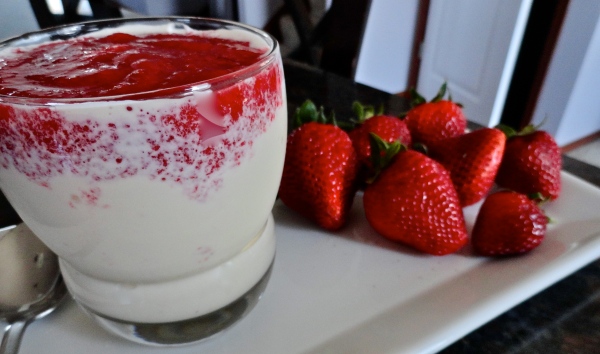 1. In a blender, puree the ice cream and milk until smooth.  Pour into 4 glasses evenly.  Rinse blender.  Add strawberries and lemon zest and puree.  Top with milk shakes with some of the strawberry puree and serve.