Yes, I know.  October might be a little late in the season to be posting a “summery” recipe, but guess what?  My tomatoes don’t start getting crazy until late August/September.  We left for California mid-late August, with only our cherry tomatoes blowing up.  My Big Boys were big, but green.  When we returned the first week of September, we had more tomatoes than we could handle.  I made salsa, and several batches of marinara sauce and stewed tomatoes to freeze.

Food and Wine certainly had my number, because one of my daily emails was summery fresh tomato soup.  In September, the weather is always hit or miss.  It could be 85 degrees and sunny, or it could be 42 degrees and rainy or gloomy.  So, soup isn’t so weird at this time of year.  Seeing as though I had a butt-load (this is a technical term) of tomatoes, I thought this would be excellent to make.

The peeling and seeding the tomatoes is the most work in this recipe, and that’s not much at all.  I just dropped the tomatoes in boiling water for about a minute, transferred to ice water, and peeled.  I then seeded them easily by cutting them in half, horizontally, then cutting out the seeds with a paring knife. 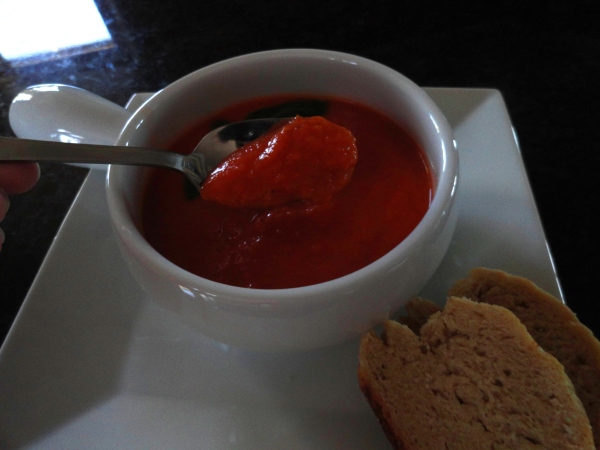 The soup was exactly how it sounds, fresh!  Some people like tomato soup made with cream, and you can certainly add some for a little luxury, but I think it’s completely unnecessary.  The soup is thick and rich, without being heavy (if that makes any sense at all).  The basil gives it the freshness, and the meaty tomatoes give it the rich thickness.  Add some crusty French bread for dipping and you’ll be in heaven!  If you use vegetable broth, this is an awesome vegan recipe.  Also, if you check your labels of your ingredients, it can easily be gluten-free (I believe tomato paste is the biggest culprit, but Hunt’s brand is gluten-free).

1. In large deep sauce pan, melt butter.  Add onions and cook over medium heat until soft, about 5 minutes.  Add tomatoes and their juices along with tomato paste and cook for about 5 minutes, stirring occasionally.

2. Add broth and basil to tomatoes, season with salt and pepper.  Simmer until the tomatoes are broken down, about 20-25 minutes.

3. Remove basil sprig and puree using immersion blender.  You can use a regular blender here, but make sure the soup is cooled first, otherwise you’ll have a huge mess on your hands (and all over your kitchen).