I was recently asked by my aunt to cater her annual cookie exchange for 10 ladies.  I was so excited – it was officially my first catering gig (though I did tell I’d do it for just the cost of groceries seeing as though it was the first time I was doing this for someone other than myself or my own friends).  She hosts this event every 10 years, as it changes from each person’s house every year.  The dinner is seated and fairly fancy.  We talked quite a bit about the menu and she had a fairly good idea of what she wanted, so that made things quite easy for me to work with. 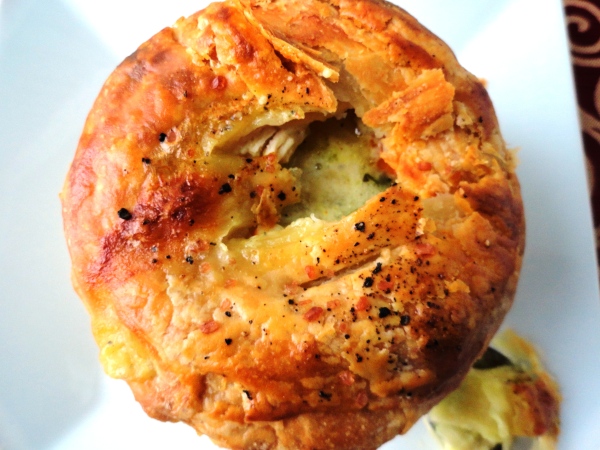 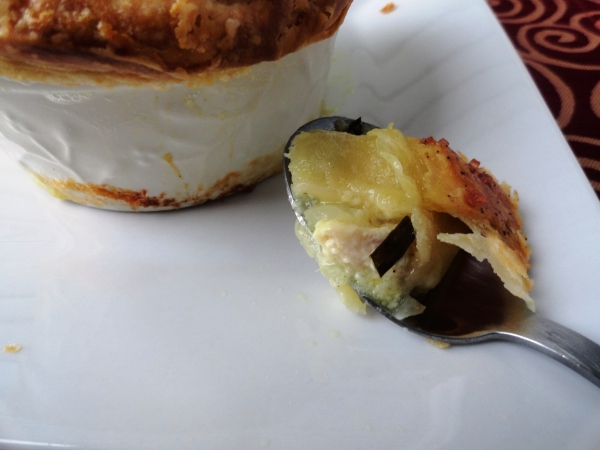 She really wanted to do something that was served in individual dishes.  I came up with a list of ideas and she settled on pot pies.  She also gave me the idea to use almond milk, which I’ve never used before, for the sauce.  I believe it was the base to a sauce she had at another event.  So I went on a mission to start working on the filling.  Thankfully, it was just after Thanksgiving and I had a bunch of leftover turkey, so I used that (though the real thing would be made with chicken).  The sauce turned out wonderful, but now I had to perfect the crust.  I originally used a pastry recipe from Ina Garten, and it was pretty good.  My intent was to make that for the event.  However, I did have some leftover pie dough in my fridge from Thanksgiving (not really sure why I saved it, but glad that I did).  I tried using that crust over the pot pies and it was absolutely to-die-for perfect! 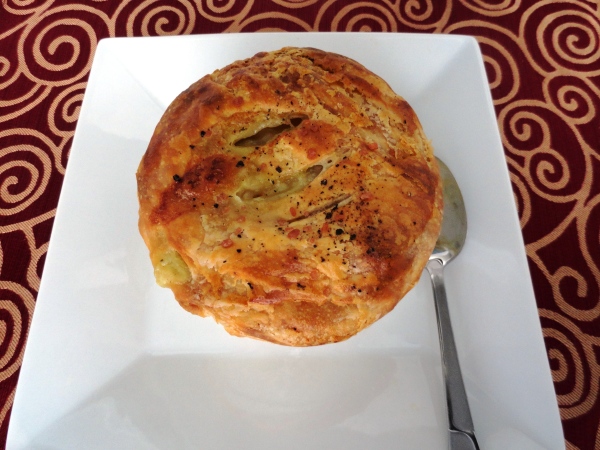 The event turned out great!  I only had one minor set back, which was not accounting for extra baking time with so many things in the oven.  No biggie. It all turned out wonderfully for my first real event.  For the rest of the meal, I served mini twice baked potatoes as an appetizer, a roasted pear salad with champagne vinaigrette, toasted walnuts and gorgonzola, and for dessert, thick mint ice cream sandwiches.  She had a blue Christmas theme going on, and wanted to use her Christmas martini glasses for a blue non-alcoholic drink.  I concocted a yummy fruity blue Christmas drink (there is an adult version, too ;)).  Thank you to my Aunt Kay for believing in me, food untasted, to take on such an important event! 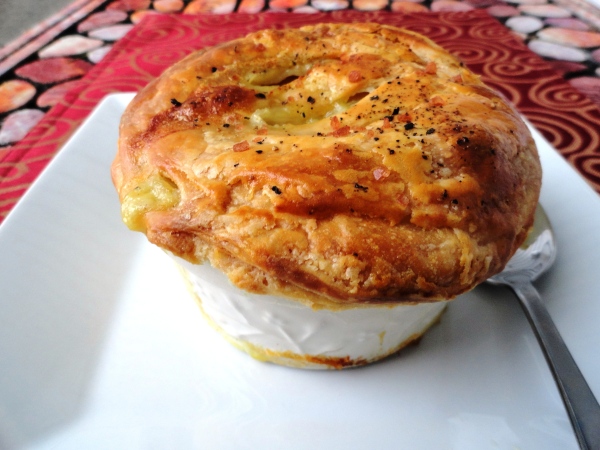 2. In a large, deep sauce pan, melt butter over low heat.  Sprinkle in flour and whisk until flour is dissolved.  Slowly add in almond milk and broth.  Increase heat to medium and bring to a boil, whisking frequently.  Allow sauce to thicken to desired consistency, then reduce heat to a simmer.

3. In a small skillet, heat olive oil over medium-low heat.  Add onions and saute until soft and translucent, about 10 minutes.  Add onions, potatoes, carrots, peas, corn, turkey, rosemary and thyme to sauce.  Simmer for 5 minutes more, then remove from heat.  Evenly divide the mixture into 6-1 cup ramekins, slightly mounding mixture over the top in the center.

4.  Preheat oven to 375 degrees.  Remove dough from refrigerator and divide into 6 equal portions.  Roll each into a small ball, then roll out into 8-inch rounds.  Brush the outside rims of each ramekin with egg wash then place dough rounds on top, trimming dough to 1/2-inch larger than the ramekins.  Tightly press the dough to the sides to make it stick.  Make three slits in the top of each pie, brush with egg wash, and sprinkle with sea salt and freshly cracked black pepper.  Place on baking sheet and bake until tops are golden brown and filling is bubbling hot, about 50 minutes.  Remove from oven and let cool at least 15 minutes before serving.  They will be HOT!