I’m not sure I even want to try making a pizza in my oven because we’ve fallen deeply in love with grilled pizza!  I even made a whole wheat crust last time, and Nate and I both loved it.  With the toppings, we almost couldn’t tell that it was made with whole wheat flour, but once we got to the bare crust, we could taste the difference, and it was so good! 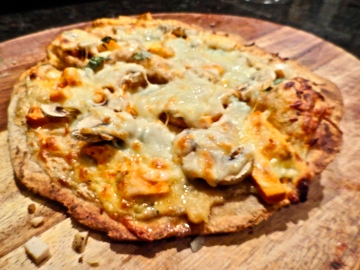 Last weekend, we opted for a buffalo chicken pizza.  Every joint makes it differently, but certainly no one uses a tomato sauce.  I’ve seen ranch dressing and alfredo sauce, but what really caught my eye was a garlic cream sauce.  Of course, this was at a chain, so it’s not like I had a recipe to use, so I winged (wung?? I think both of those words sound wrong) it.  It turned out great, but I’m thinking I should have added a little more sauce to the crust, as it was lost under the spicy buffalo chicken.  I’m sure I’d notice if it weren’t there though.  Black olives or black beans would have been a great addition, and also add another color to the pie. 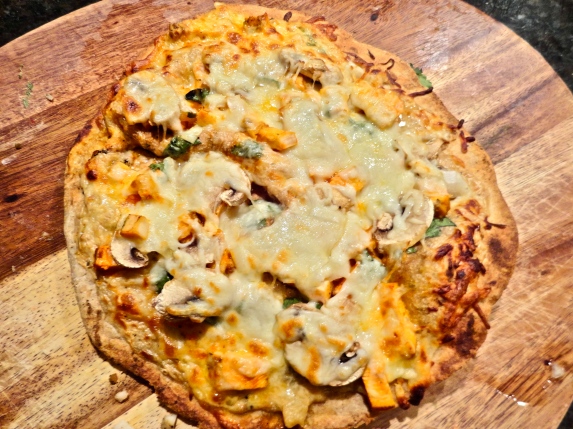 When we make grilled pizza, we usually don’t get around to eating until pretty late in the evening, which means I don’t get quite as good of a picture of it 😦  Next time, I’ll have to remember to make this during the day and update my pictures so you can see exactly how good it tasted! 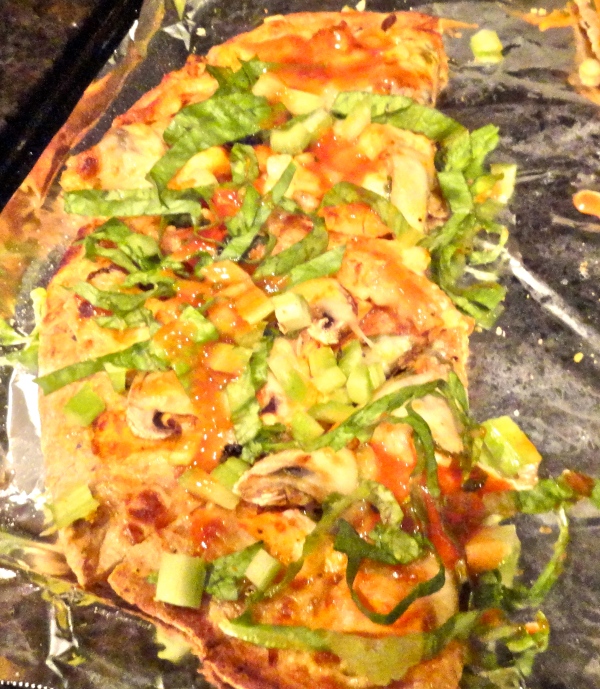 Source: Pigzilla Original
Servings: Makes one small pizza (quadruple if you are doing all buffalo chicken pizzas and using my grilled pizza dough recipe, as it makes 4 small pizzas)

1. Prepare dough according to grilled pizza dough recipe, whole wheat pizza dough, your own crust recipe, or a pre-made crust.  Follow directions until it comes to adding toppings to your pizza.  Spread with garlic cream sauce, leaving just 1/4 – 1/2 inch crust around the outside.

2. In a small bowl, combine diced chicken with red pepper sauce.  Sprinkle chicken evenly around the pizza, then add onions, cheese and cilantro.  Cook according to the crust recipe’s specifications.

The first time I had buffalo chicken wontons was at a bar in Minneapolis after a beer festival.  Of course, at the time, they tasted AMAZING, because what wouldn’t after a few brews?  But, I had become obsessed and had to recreate them at home.  I’ve been “into” cooking for quite some time, but this is one of the first times I can remember thinking I had to, and could, recreate something that I had in a restaurant.  I lived alone at the time, so I was my only judge.  I thought they were pretty good, seeing as though I’d never worked with wonton wrappers before, I made up the recipe, and I baked them.  However, I was my only judge.  They didn’t look very pretty, but they sure tasted great.

Finally, I made them for a Viking playoff party (you can tell this was a few years ago, because the last time they were in the playoffs was 2010, when the Saints took a cheap shot at golden boy, Brett Favre.  No, I’m not bitter 😉 ), and everyone seemed to love them.  Nate adores them.  So, needless to say, I’ve made buffalo chicken wontons quite a few times over the last three years.  This was the first time I’ve attempted to make them in muffin tins, making for a much prettier presentation, and no risk of your wonton bursting while cooking, and all the delicious goodness leaking out. 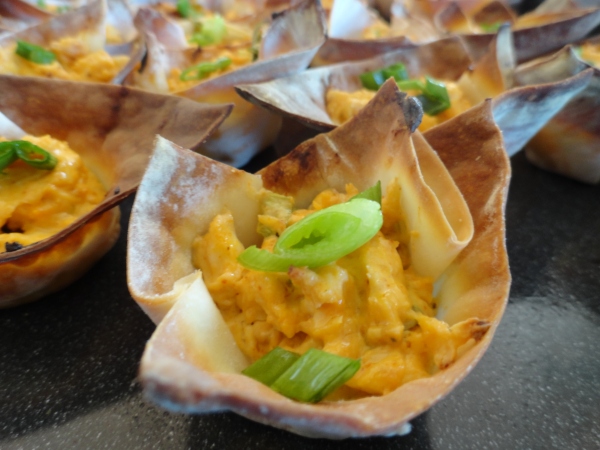 I’m thinking they went over pretty well at the party we went to.  As they came out of the oven, everyone was asking what they were and commenting on how good they looked.  Before I knew it, there was only two left on the tray, so my guess is that yes, they were a hit!  I really liked the addition of the raw green onions after cooking. It really gave these a fresh flavor with an unexpected crunch. 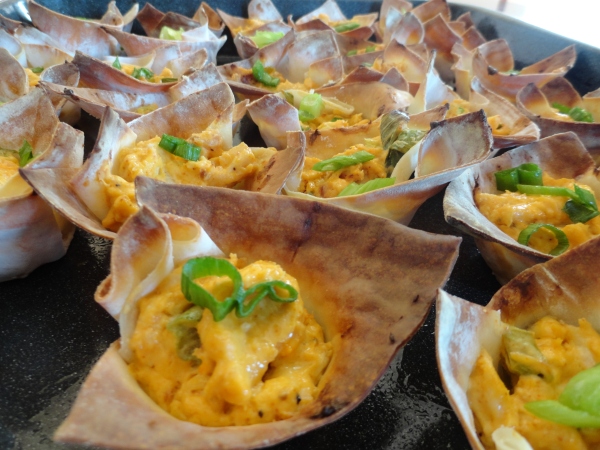 These are pretty similar to crack dip, however, I don’t use any shredded cheese, just cream cheese.  I also used chicken I baked and shredded as a opposed to using canned chicken.  Buffalo chicken wonton cups are quick and easy to throw together in a flash, great for any party or even date night home with your sweetie. 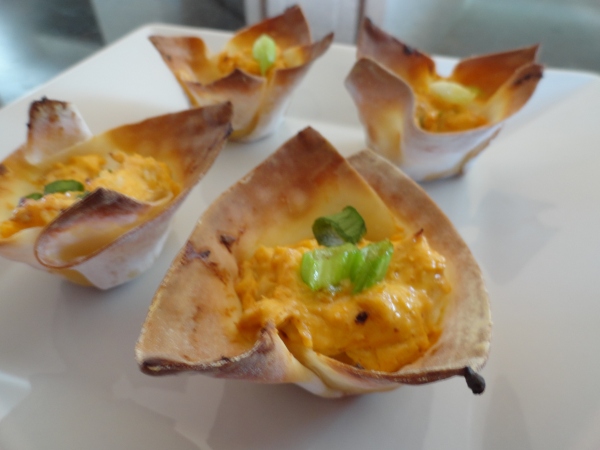 1. Preheat oven to 375 degrees.  Prepare baking sheet with foil and spray with cooking spray.  Season each side of the chicken breasts with salt and pepper.  In a small bowl, combine chili powder, paprika, and garlic powder.   Sprinkle each side of both chicken breasts with mixture.  Bake until cooked through, about 22-25 minutes.  Remove from oven and set aside to cool.

2. In a large mixing bowl, combine red pepper sauce and cream cheese until smooth.  Once chicken is cooled, shred with two forks, and add chicken to cream cheese mixture.  Add green onions, leaving a few for garnishing, and mix until well combined.

3. Preheat oven to 400 degrees.  Place wonton wrappers in mini muffin tin.  Scoop 1-2 tbsp of cream cheese mixture into each wonton – they should be filled just about to the top of the tin, not the wonton wrapper.  Bake 10-12 minutes, until wontons are crisp.  Remove from oven and turn off heat.  Give a quick spray with cooking spray, and return to warm oven for 1-2 minutes.

* Note, the cooking spray part is optional, but I like it because the wonton wrappers tend to have a floury coating on them, so they don’t look pretty.  If you spray with cooking spray before baking, the wontons will get too crisp on the top, but not on the bottom.  Spraying after cooking gets rid of the floury excess and gives them an appetizing shine.

I’ve made buffalo chicken sandwiches tons of times, but this was the first time I shredded the chicken, just to change it up a bit.  Plus, then the whole chicken breast isn’t sliding farther and farther off the bun because of the sauce, and soon you’re left with a spicy chicken breast with no bread or toppings.  You know what I’m talking about.

This version was really good, maybe a little dry though.  That quite possibly could have been due to my lack of sufficient Frank’s Red Hot on hand 😦  However, many people enjoy blue cheese or ranch dressing with their buffalo sammies, so that would be a wonderful addition, especially for those of you who are sensitive to heat.

The chicken breast could certainly be made on the grill, skillet, or the oven as I did.  Also, if you really want to keep the chicken breast whole, go for it.  Shredding takes a little extra time, but it’s NBD 😉 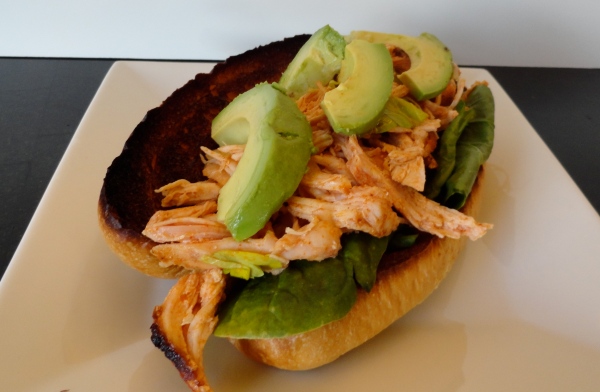 3. Place sliced hoagies/rolls sprayed with non-stick cooking spray under broiler until they begin to brown.  Place spinach leaves on hoagies/rolls, spoon on chicken mixture and top with sliced avocado.  Add cheese or dressing as desired.