I know I went back on my word of posting once a week, but I have a very good excuse. Our best friends got married in Mexico, so Nate and I were gone celebrating for 10 days! That didn’t leave a lot of time for cooking and blogging leading up to and after, but we’re back on track now! I was too busy balling my eyes out, and my husband was too busy sweating up a storm (ruining their pictures) to take any of our own pictures of the actual ceremony. But what we did do is spend one wonderful day with alone with the bride and groom, and it was absolutely fabulous! Here’s a quick pic of the four of us on a cliff off Isla Mujeres after sampling some of the local tequila, of course 😉

We have so many awesome memories from Mexico with the Fishers and Co., from their beautiful wedding, spending great times with their family and friends, sailing, swim up bar, water aerobics and trivia, Isla Mujeres and getting completely poured on, cards in the lobby bar, deep sea fishing, all the way to getting put on official probation by the hotel Assistant Manager. I am so thankful to be included in such a special event and will remember that vacation forever! I’ll share more pictures of our awesome trip once we have them uploaded.

Because there’s no real good transition from trip to Mexico to Thai glazed corn on the cob, I’ll just jump right in…

I feel like we didn’t eat our share of corn this year, but can you ever have enough? Probably not when it’s fresh from the farm! I grew up eating corn on the cob in probably one of the most traditional ways – boiled with butter and salt. As I got older, I enjoyed it grilled in the husk with salt and pepper. This glaze really takes corn to a whole new level.

The glaze is slightly sweet, but the fish sauce adds a salty element. Grilling for just a little longer after brushing on the glaze caramelizes the sugars and makes every single kernel pop! I think this glaze would be great on almost everything – chicken, pork, shrimp, fish! It’d even be a great wing glaze!

We’re pretty much at the end of the prime corn season, but if you’ve still got some fresh ears, I highly recommend trying out this recipe.

1. In a small saucepan, combine the coconut milk, soy sauce, sugar, fish sauce and lime juice. Cook over moderate heat until the glaze is syrupy, about 10 minutes.

2. Preheat grill to medium heat and grill corn until charred and tender, 10-15 minutes, turning occasionally. Brush cobs with glaze during the last 5 minutes. Cut each corn cob into thirds (or don’t, because you’ll likely want an entire ear to yourself), transfer to platter and garnish with cilantro and lime wedges.

I’ve had quite the Asian theme going in the last few posts, and we couldn’t be happier campers.  Well, maybe Nate would be if he didn’t have to split the leftovers with me!

Pad Thai was on my 30 Before 30 list, and as the months are quickly dwindling away, I am finally getting to it.  I really should have tried it much sooner because it was amazballs.  Part of the reason it has taken me so long to try this recipe is because one of the star ingredients, tamarind, isn’t available at my local grocery store.  I actually had to step outside my comfort zone and stop into my local Asian market.  Not sure why I was hesitant or what I was really expecting, but the gentleman who was working was quite friendly and more than helpful.  This market carried paste, powder, and the solid block.  Some upscale grocery stores may carry tamarind, usually in paste form and in the Asian isle.  But, the recipe I followed strongly suggests using the solid form that comes in a block. 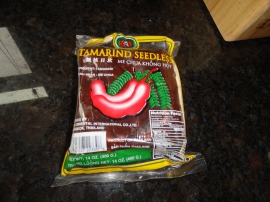 Clearly, I’ve never worked with tamarind before, but I’m sure I’ve had it in a handful of Asian dishes I’ve ordered, not even knowing what the flavor really was.  Tamarind is a pod-like fruit that tastes quite sweet and slightly tart.  In my opinion, the sweetness and consistency is similar to figs.  Seeing as though I only needed 3 tbsp for the Pad Thai, I had most of the block left.  After some research, it appears the tamarind block can be stored in airtight container on the shelf.  No refrigeration necessary.  Most people says it lasts “forever”, though I’m guessing you’ll use it all before forever comes after you’ve tried this Pad Thai.

This recipe comes from Nicole over at Prevention RD.  It was another home run!  I can always count on her food to be yummy.  There are a lot of components, and it’s slightly cumbersome to prepare, but as Nicole suggests, if you have everything measured out and ready to go, it comes together really quickly.  This dish really hit the spot!  After a long night with friends (and a few drinks), we were really ready for some flavorful comfort food.  It’s amazing how much flavor the peanuts add, so do NOT forget them!  For you vegetarians, the shrimp can easily be omitted or substituted with tofu, and omit the fish sauce or use this recipe for a substitute.  I only made a few adaptations to Nicole’s recipe, which was using 1 tsp cayenne rather than 3/4 tsp (of course we like it spicy), and using fresh rice noodles rather than the dried variety.  Whether you think you like Thai food or not, I highly suggest trying this out.  Nate and I really enjoyed it; he even had two hearty helpings! 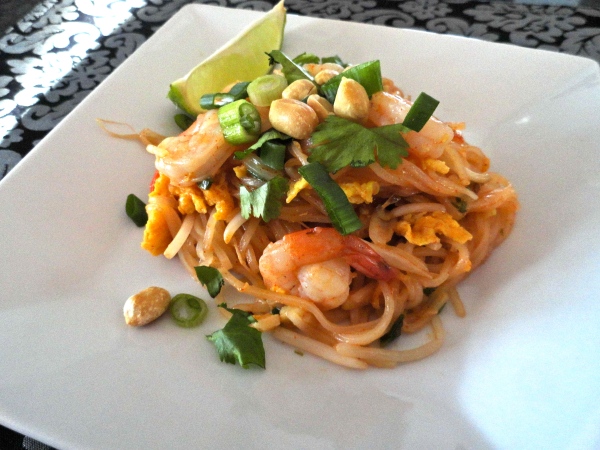 2. If using dried rice stick noodles, cover with hot tap water in large bowl; soak until softened, pliable, and limp but not fully tender, about 20 minutes.  Drain noodles and set aside.  If using fresh rice stick noodles, in a medium sauce pan, fill with water and bring to a boil.

4. Heat 1 tbsp oil in large skillet or wok over high heat until just beginning to smoke.  Add shrimp and sprinkle with remaining salt.  Cook and flip occasionally, until shrimp are opaque and beginning to brown around edges, about 3 minutes (don’t worry, they don’t have to be cooked completely through at this point).  Transfer to plate and set aside.

5. Discard any excess liquid in pan.  Add remaining tbsp oil to skillet and swirl to coat; heat to medium.  Add garlic and shallot and cook until golden brown, about 1 1/2 minutes.  Add eggs to skillet and stir with wooden spoon until lightly scrambled, less than 1 minute.  Meanwhile, drop rice stick noodles into boiling water, immediately remove and transfer to skillet.  Pour fish sauce mixture over noodles, increase heat to high, and toss constantly to coat noodles evenly.  Scatter 1/4 cup peanuts, bean sprouts, scallions (reserving some for garnish) and cooked shrimp over noodles.  Continue to cook on high, tossing until noodles are tender, about 3 minutes.