I know I went back on my word of posting once a week, but I have a very good excuse. Our best friends got married in Mexico, so Nate and I were gone celebrating for 10 days! That didn’t leave a lot of time for cooking and blogging leading up to and after, but we’re back on track now! I was too busy balling my eyes out, and my husband was too busy sweating up a storm (ruining their pictures) to take any of our own pictures of the actual ceremony. But what we did do is spend one wonderful day with alone with the bride and groom, and it was absolutely fabulous! Here’s a quick pic of the four of us on a cliff off Isla Mujeres after sampling some of the local tequila, of course 😉

We have so many awesome memories from Mexico with the Fishers and Co., from their beautiful wedding, spending great times with their family and friends, sailing, swim up bar, water aerobics and trivia, Isla Mujeres and getting completely poured on, cards in the lobby bar, deep sea fishing, all the way to getting put on official probation by the hotel Assistant Manager. I am so thankful to be included in such a special event and will remember that vacation forever! I’ll share more pictures of our awesome trip once we have them uploaded.

Because there’s no real good transition from trip to Mexico to Thai glazed corn on the cob, I’ll just jump right in…

I feel like we didn’t eat our share of corn this year, but can you ever have enough? Probably not when it’s fresh from the farm! I grew up eating corn on the cob in probably one of the most traditional ways – boiled with butter and salt. As I got older, I enjoyed it grilled in the husk with salt and pepper. This glaze really takes corn to a whole new level. 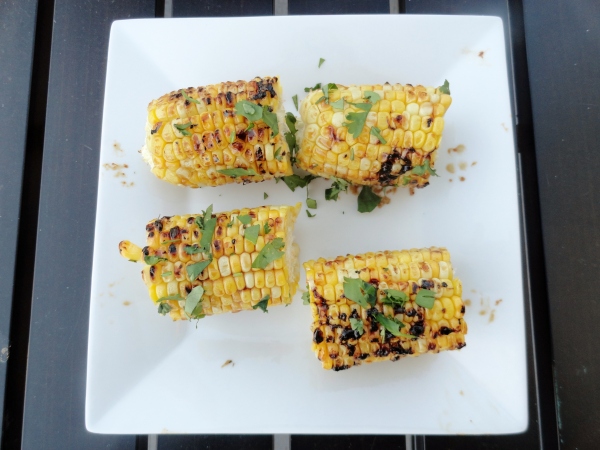 The glaze is slightly sweet, but the fish sauce adds a salty element. Grilling for just a little longer after brushing on the glaze caramelizes the sugars and makes every single kernel pop! I think this glaze would be great on almost everything – chicken, pork, shrimp, fish! It’d even be a great wing glaze!

We’re pretty much at the end of the prime corn season, but if you’ve still got some fresh ears, I highly recommend trying out this recipe.

1. In a small saucepan, combine the coconut milk, soy sauce, sugar, fish sauce and lime juice. Cook over moderate heat until the glaze is syrupy, about 10 minutes.

2. Preheat grill to medium heat and grill corn until charred and tender, 10-15 minutes, turning occasionally. Brush cobs with glaze during the last 5 minutes. Cut each corn cob into thirds (or don’t, because you’ll likely want an entire ear to yourself), transfer to platter and garnish with cilantro and lime wedges.

I’ve never cooked duck before, and I’ve only eaten it on rare occasions, and usually it was cooked by my dad in the slow cooker.  He stopped by this Sunday to bring me some more tomatoes, fire wood, and some duck breasts.  Fresh duck breasts, if you know what I’m saying.  These aren’t the giant plump breasts that you can find at the store with a good amount of fat on them.  These are small, fit in the plam of your hand, completely trimmed breasts.  You can certainly use store bought duck, just know that they are quite a bit bigger and usually have a good amount of fat on them.

This put a wrench in my somewhat planned menu for the week because I really didn’t want to freeze it, as I knew it’d probably get lost in there.  We’re heading up to the great city of Duluth this weekend to see one of my bestest childhood friends.  Oh, and Jerry Seinfeld.   Wahoo!  Anyway, because we’ll be out-of-town for the weekend, we have a limited number of meals, and with almost every meal comes leftovers.  I decided to throw the beef roast I had in the fridge in the freezer and make it another time.

Back to the duck.  I needed to find something to do with it other than the slow cooker, and I turned to my number one source for wonderfully delicious recipes, Food and Wine.  I came across a recipe from Andrew Zimmern, a Minnesota resident, that sounded interesting.  I truly adapted this recipe to my own, as I didn’t have dashi powder or mirin.  A quick stop at my Asian market and I’m sure I could have found them, but I wasn’t sure how much more I’d use them, so decided to use some substitutions. 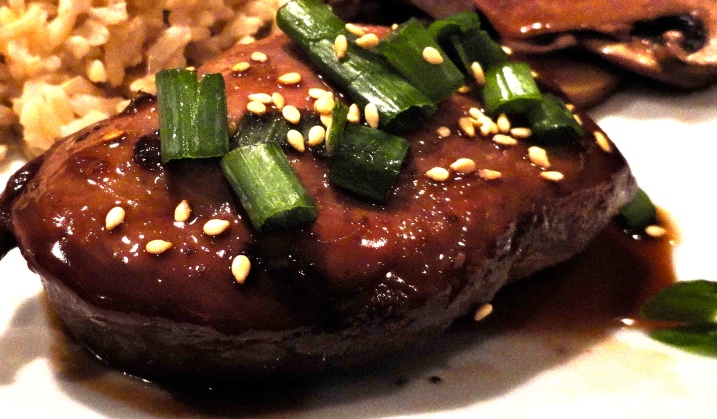 From my vague understanding of dashi is that it is a cooking stock.  There is ultimately no substitute, but to come somewhat close, I used chicken broth with a dash of fish sauce.  Who knows how close this comes to dashi, but at least it’s creative!  Mirin is a little easier to substitute.  It’s a very sweet Japanese rice wine.  I used sherry instead.

The outcome for my substitutes were awesome.  I’m sure Andrew Zimmern’s version is a little better, but who cares!?  He’s never going to make it for me, or you probably, so try this version, you’ll like it!  While I thought the duck would be a bit gamey, it wasn’t at all.  The glaze was awesome and would probably be great on pork, chicken, or even shrimp or scallops (idea!).  I cooked the breasts to a medium, and the flavor was out of this world amazballs.  Thanks, dad! 🙂

1. In a large sauce pan, combine chicken broth, sake, soy sauce, sherry or mirin, sugar and fish sauce.  Bring to a boil, then reduce heat.  Simmer for 45-60 minutes, until glaze is syrupy and reduced to about 1/2 cup.

2. Heat oils in a large skillet over high heat.  When oil is shimmering, reduce to medium-high, and add duck breasts.  Cook for 4-5 minutes.  Flip breasts and add glaze to pan.  Cook for another 5-7 minutes, to desired doneness.  Remove duck from pan and rest for 5 minutes.  Serve with additional glaze, green onions and sesame seeds for garnish.