I love sweet potatoes. While they seem to be more of a fall/winter vegetable, I can eat them all year long. As a matter of fact, this recipe is wonderful to make in the summertime while you are grilling. Throw everything together and in the oven, and forget about it for about an hour. All you have to do is watch the meat and make sure you have a fresh drink!What more could you ask for?

The brown sugar adds just a hint of sweetness to these potatoes, while the fennel pulls it all together with a pop of freshness, especially using the green tops. This is great for entertaining, or making it on Sunday for a week-long reheatable side dish. 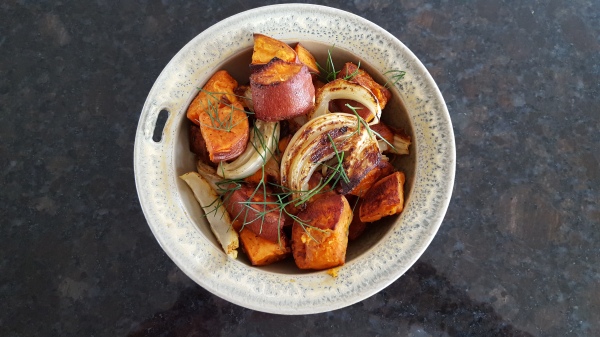 1. Preheat oven to 400 degrees. In a bowl, toss the sweet potatoes and fennel with olive oil, brown sugar, mace, salt and pepper.

2. Spread the vegetables on a foil lined baking pan. Roast for about 1 hour, stirring occasionally, until the sweet potatoes and fennel are tender and caramelized. Transfer them to a platter, sprinkle with t he fennel tops and serve.

If you don’t have apple cider in your fridge this time of year, you are adulting incorrectly. I suppose it’s past prime apple season, but it’s still a perfect winter warmer. Not only is it delicious on it’s own (or with a smidge of brandy), but it’s great for cooking, too! 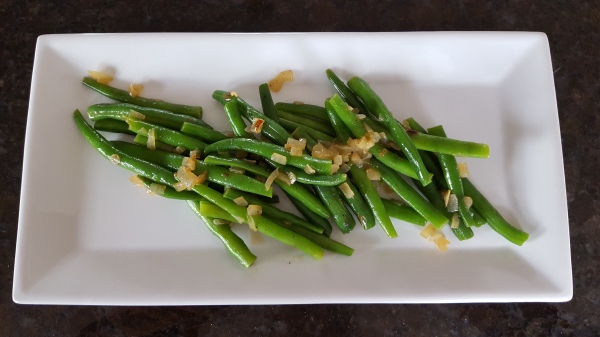 We eat a lot of vegetables in our house, but I feel like I’m always doing the same thing with them. Sauté in olive oil, salt and pepper, serve. Repeat. If you want to add a little excitement to your hum-drum vegetables, add cider! This is a quick, simple twist on green beans, which add just a little bit of sweetness. If you don’t have cider, don’t be afraid to use white wine. I did the last time I made these, and they were fantastic! 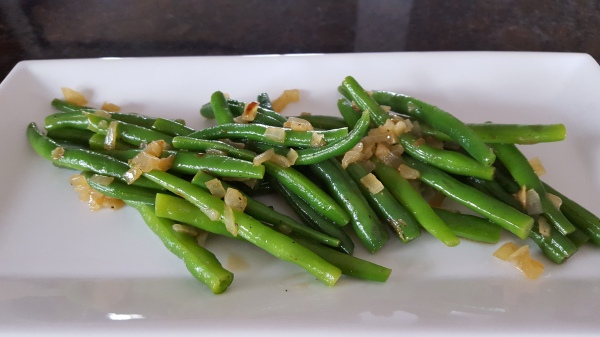 1. Bring a medium saucepan filled with water to a boil. Add green beans and boil for 4-6 minutes, or until tender, but with a bite. Remove from heat and drain beans. Set aside.

2. Heat a small skillet over medium-low heat. Add a drizzle of olive oil and the onions and cook until beginning to caramelize, about 10 minutes, stirring frequently. Add the cider, raise the heat to medium-high and cook until liquid is reduced and syrupy, about 5 minutes.

3. Add beans to the pan with onions and cider. Toss to coat, salt and pepper to taste.

The first time I made the rich and creamy mashed potatoes for my family’s Christmas dinner, I was at my parent’s house.  I brought a lot of ingredients and some equipment I knew they didn’t have.  On my list of the things to bring (in my mind) was my potato ricer.  Guess what I forgot?  My potato ricer.  Not that I don’t like a chunky mashed potato, but the very name of the recipe indicates that it wasn’t chunky.  I planned to just use their hand mixer, when I spotted their Ninja.  If you’ve never used one before, they are fantastic.  Not as pricey as a Vitamix, but it works wonders!  I fell in love with my parents’, and then Momma Marsha gifted me one last year.  It’s the best!  Anyway, I used their Ninja to blend the potatoes, and they turned out fantastic!

When I made the jalapeno and cheddar version of mashed potatoes, I used my Ninja again.  It’s so much easier than the potato ricer – my arm always gets tired when you’re doing large batches 😦  As you know, I’m not a cheese fanatic, so I didn’t try these, but they sound fantastic with the jalapeno and cheddar combination.  Of course, I had to use my official taste tester, the hubs, and he said they were good.  That’s as best of a description I can really give, because that’s all he said, but I’m guessing he really liked them as he’s taken them two days in a row for lunch.

Mashed Potatoes with Jalapeno and Cheddar

1. In a large saucepan, cover potatoes with water and bring to a boil.  Add a generous amount of kosher salt and simmer over moderate heat until potatoes are fork tender, about 20 minutes.  Drain potatoes.

2. In the same saucepan, melt butter in milk over moderate heat.  Stir in white cheddar until melted.  Remove from heat and press the potatoes through a ricer into the saucepan and mix well.  Fold in the mayonnaise and jalapeno and season with salt and pepper to taste.

This week is mashed potato week!  Not officially, just here on Becoming Pigzilla.  I really wanted to get these recipes out before the holidays, but we were really ‘potatoed-out’ after all the whipped sweet potatoes I shared before Thanksgiving.  But don’t worry, you don’t need to be celebrating a holiday, or even entertaining company to make any of these mashed potatoes.  They are each a little different and would be a fun addition to you weekday menu.

A few months ago, I was having a conversation with my grandmother about mashed potatoes.  She asked me if I had ever used mayonnaise in my potatoes, which I said, “absolutely not, that sounds weird.”  I don’t remember who she said did it, but I do remember her telling me they were fantastic.  After thinking about it, I supposed it couldn’t be all that bad, and it would add some rich creaminess to the potatoes.  Funny enough, the next week, I was loyally reading my Food and Wine magazine, and came across a series of mashed potato recipes made with mayonnaise.  If my grandmother and Food and Wine were telling me to use mayonnaise in mashed potatoes, then I must try it.

Turns out, they were both right.  I made these mashed potatoes for the Pigzilla family Christmas dinner, and everyone seemed to love them.  I especially thought they were so luxurious and velvety – they really live up to their name of “rich and creamy”.  I know it sounds weird, but just try it out. What I did was add a little mayonnaise at a time after all the other ingredients were mixed in.  Taste as you go, and you’ll be able to notice the difference.  Don’t go overboard with the mayonnaise though, otherwise the flavor will become too overpowering and the consistency can become kind of questionable.  These potatoes were the perfect vessel for a classic brown gravy.  They are also a fantastic base for two of the other mashed potato recipes I’m sharing this week, bacon and mustard mashed potatoes and cheddar jalapeno mashed potatoes.  Stay tuned! 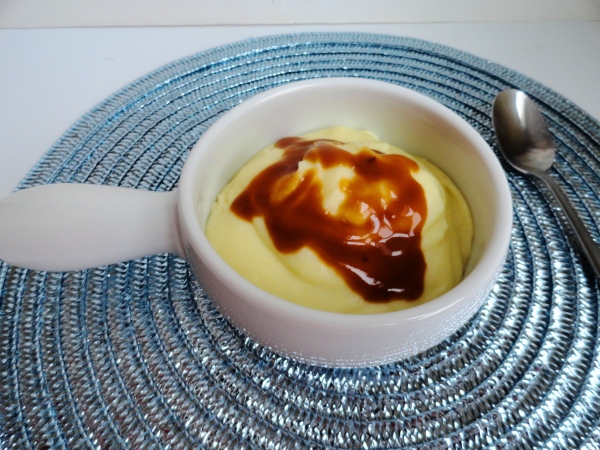 1. In a large saucepan, cover potatoes with water and bring to a boil.  Add a generous amount of kosher salt and simmer over moderate heat until potatoes are fork tender, about 20 minutes.  Drain potatoes.

2. In the same saucepan, melt butter in milk over moderate heat.  Remove from heat and press the potatoes through a ricer into the saucepan and mix well.  Fold in the mayonnaise and season with salt and pepper to taste.

I like parsnips, but I don’t recall ever eating them plain (they always seem to be in something) and I know for sure I’ve never cooked with them.  I saw this recipe on Food and Wine and thought I’d expand my horizons and my veggie arsenal. In case you’re wondering, parsnips are those huge white carrot looking vegetables with the waxy exterior.

My bestie was in town from Duluth, so we had planned to get together on Saturday night.  Nate offered to smoke us a chicken, so I was simply in charge of everything else.  It was quite nice!  We ended up having a little party as my friend’s mom, PJ, and our neighbor and her son came for dinner.  It was honestly a weird grouping of people, but we had the best time chatting and eating and ended up staying up until almost 3:00 AM!  That’s surely a sign of a good time!  Kristin brought the most delicious LIGHT raspberry lemonade cake.  It was fluffy, sweet and tart, and the best part is that there was only 130 calories in one serving.  Don’t mind the fact that I ate two pieces…

Seeing as though the group had grown from 3 to 6, I was little concerned about the parsnips as they aren’t necessarily a “main steam” vegetable, and entertaining a larger group of people gives you a higher chance of picky eaters. Thankfully for me, everyone was willing to give them a try, and actually seemed to like them.  PJ said she liked them more than sweet potato fries, and she said sweet potato fries were her favorite.  What a great compliment!  I served a mustard vinaigrette as a dipping sauce, and that really gave the parsnips a tangy bright flavor, but it wasn’t even necessary.  The vinaigrette was tastey though, and adapted quite a bit from the original recipe based on what ingredients I had on hand.  I still have some leftover and it’ll make a great salad dressing as well.  Overall, these were a delicious and fun way to get out of our everyday vegetable rut! 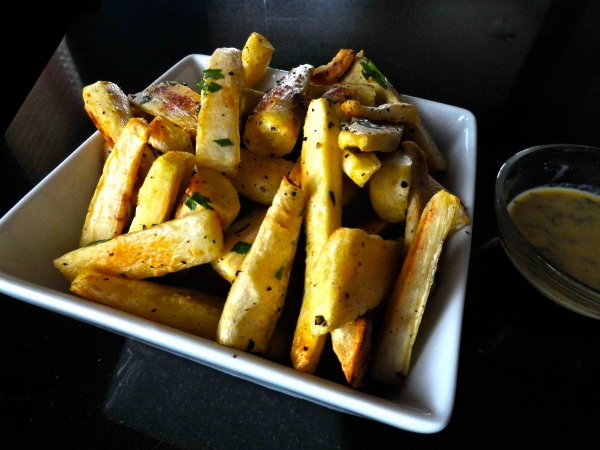 1. Preheat oven to 425 degrees.  In a large mixing bowl, combine 1/3 cup olive oil and parsnips.  Toss to coat evenly and season with salt and pepper.  Spread the parsnips on a foil lined baking sheet in a single layer.  Roast for 30 minutes, until caramelized.

2. In a mixing bowl, whisk together vinegars, Dijon, and sugar.  Drizzle in remaining 1/3 cup olive oil until vinaigrette reached desired consistency (you  might not need it all).  Stir in chopped parsley. Serve alongside roasted parsnips.