I really had no intention of making naan, but it was suggested for my 30 Before 30 list by a reader, so I thought, why not?  And I’m glad I did.  What I’m not glad I did (or didn’t do) was not read the entire post before I made her recipe.  I followed the recipe as written, and when I started typing up this post, I read through what she actually said.  Guess what she said?  She put cinnamon and sugar on one of the batches!  What?  That sounds amazing.  But, I suppose they’ll be time to try that in the future.  I was satisfied with what I made.  The grass is always greener…

I’ve never had traditional naan, but if I had to guess, this is probably what it supposed to taste like.  At least I sure hope so, because it was pretty delicious!  As I was already planning to make sourdough this weekend, I didn’t think I needed a lot more carbs in the house, so I cut the original recipe in half.  The recipe suggested chives and caraway seeds, but I didn’t have any, so I used only cumin.  I really liked the smokeyness that the cumin brought to the naan.  Now if I had only made some sort of Indian cuisine to eat this with.  I didn’t. Something else to add to my list of “to-dos” I guess.  I did cut them in half and stuffed them, like a pita pocket, with spinach and chicken, topped with a little yogurt-dill dressing.  They were phenomenal!

1. Stir water and yeast together in the bowl of a stand mixer, fitted with a dough hook.  With the mixer turned on, add 1 1/2 cups flour.  Beat for one minute, scraping flour from sides if necessary.  Sprinkle salt over the mixture, and begin adding remaining flour, 1/2 cup at a time until it forms a stiff dough.  You may not need to use all the flour.  Continue to knead the dough in the mixer, about 5 minutes.

2. Transfer dough to lightly oiled bowl, turning once to completely coat the dough in oil.  Cover with damp towel and let rest at room temperature until it has doubled in size, about 2 hours.

3. Place baking stone in oven on center rack.  Preheat to 500 degrees.  Set aside a bakers peel or a baking sheet lightly dusted with flour.  Turn dough out onto a lightly floured surface, and divide into four equal parts.  Roll each into a ball and flatten with palms.  Roll each piece out to 1/4-inch thick, about 5-6 inches across.  Sprinkle each with water, salt and cumin.  Pierce each round several times with the tines of a fork.

4. Slide onto baker’s peel or floured baking sheet, and transfer to baking stone.  Bake for 6-8 minutes, until tops begin to brown.  Remove and let cool on wire rack before serving.

Ever have one of those moments when you’re on the verge of disaster, and you cannot for the life of you figure out what when wrong?  I just did. 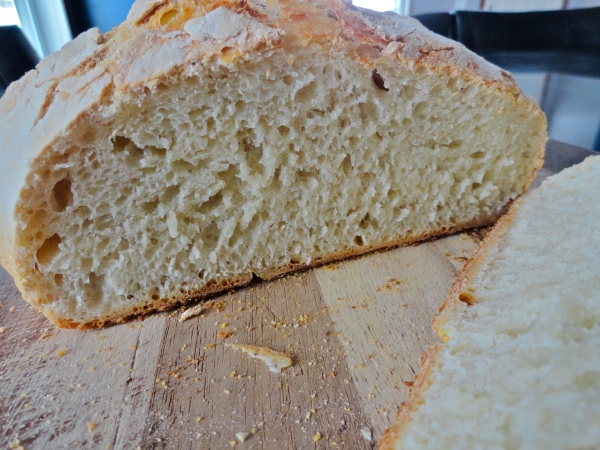 Another bread…and sourdough none the less.  I found this recipe on the Food Network site, and it was Alton Browns (I really dig him!).  The recipe had several great reviews, and it shouted “simple”.  So I went for it.  Knead-not means I knead-not use my new stand mixer.  Oh well, plenty of future opportunities.  This certainly didn’t turn out how I anticipated; I thought it was ruined before I even baked it.  The dough was really lose and sticky, and after letting it rise for about 24 hours, I was supposed to punch it down, take it out and make it into a ball.  I really didn’t see how that was possible because I had a super sticky mess.  Was it possibly that I didn’t convert ounces to cups properly?  Yes.  Was it possible that I somehow didn’t add enough flour?  Yes.  Was it possible that I added too much water?  Unlikely 🙂  I only know this because the measuring cup had ounces on it and I remember filling it to 12.

Anyway, the point is that there are several things I could have done wrong, and I have no idea what it was.  It is slightly possible that I did everything right, and it was just supposed to be sticky.  Either way, when I turned out my sticky dough onto my heavily floured countertop, I dumped in about 1/2 – 3/4 cup flour just so that I was able to work with it and it wouldn’t stick to my countertop.  I worked in the extra flour and then let it rest for another few hours before I baked it.  It didn’t rise anymore, as the recipe said it should have, and I was confident that it was ruined.  I baked it as directed anyway, seeing as though I’d made it this far, and surprisingly, it turned out really well!  The outside was crunchy and crusty, while the inside was soft and chewy.  However, it did not have the traditional tang of a sourdough.  It was mildly tangy, but not what you’d hope for in a sourdough.  At least it wasn’t a total disaster as I originally thought it would be.  And it was perfect for dipping in my roasted tomato and basil soup. 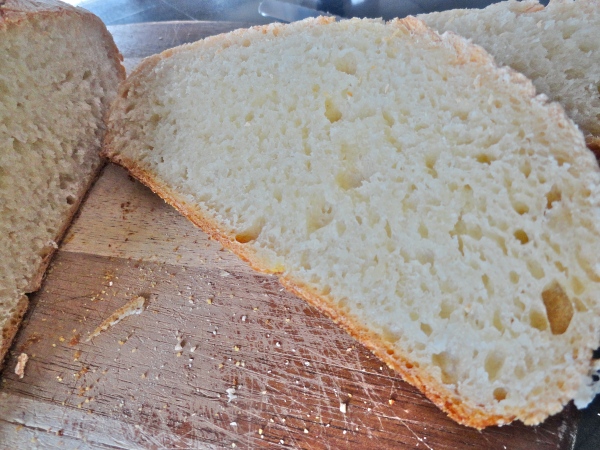 1. Whisk together flour, yeast and salt in a large bowl.  Add water and stir until combined.  Cover bowl with plastic wrap and let sit at room temperature for 19 hours (mine sat for closer to 30).